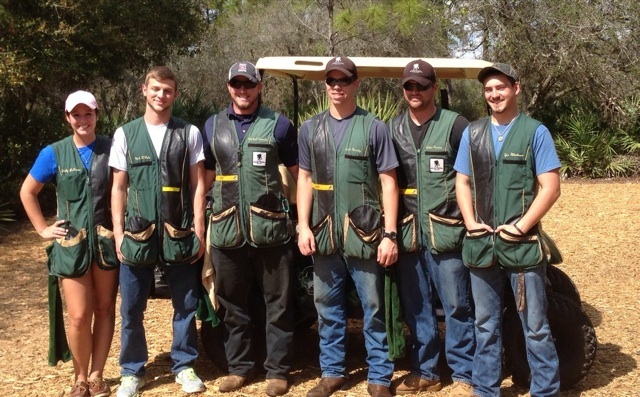 Our 2014 Seminole Cup Team. From left to right:

Jacksonville University’s Varsity Shooting Team continues to develop its unique relationship with the Wounded Warrior Project based in Jacksonville, including recently hosting 18 veterans for clay target shooting, as well as arranging an eye-opening visit by JU staff to WWP’s facilities.

Dobson’s nephew-in-law, Dan Nevins (SSG, U.S., Ret.), an EVP at the WWP, lost his legs in Iraq while on a classified mission and credits the WWP for being a major factor in helping him recover. He has been the inspiration for Dobson’s involvement in the WWP as a volunteer since 2008.

With more than 300 veterans on the JU campus, including graduates of the WWP’s TRACK program, this was a fitting visit for President Cost and accompanying guests. JU student veterans and members of JU NROTC play a major role in the JU community, and the Student Veterans Center scheduled to open on campus Nov. 7 is a testament to their service and sacrifice.

While standing in front of the WWP display of a piece of steel from the Twin Towers — a gift to the WWP from the City of New York – President Cost remarked that it was only by a last-minute meeting change that he was spared from being in the Twin Towers at the time planes hit them on 9/11 – a sobering moment for all in attendance.

The 90-minute visit included a full tour of the WWP headquarters; an in-depth sharing of their mission, history and major players; and a stop-off at the WWP’s TRACK program facility, where Warriors spend a year rebuilding their minds, bodies and spirits. The visit was emotionally charged: one cannot set foot inside and not feel touched by the realization of the humanity for one’s fellow man and the sacrifices of our military.

A few weeks later, on Sept. 17, the JU Varsity Shooting Team and some Jacksonville veterans hosted 18 Warriors from the WWP at the Jacksonville Skeet & Trap Club, in a day of fellowship and clay target shooting.

The day provided laughs, fun and healing for all. In particular, JU Team Capt. Matos-Minehart inspired all around her. She has served in the U.S. Army for 11 years; has done three tours, in Iraq, Kuwait and Afghanistan; and is a combat-wounded veteran. The JU Shooting team affectionately calls her “Sgt. Sparky,” and this mother of two girls is an inspiration to all of us. She reminds us that we must never forget.

We thank all of the veterans and their families for their service and sacrifice.

Captain Scott Hensley started off the morning June 15 with a strong score in sporting clays that netted him the title of Georgia SCTP State Sporting Clay Collegiate Champion. Mike Esposito and Lissette Matos, also team captains, recorded strong scores in sporting clays, with the Dolphins finishing second as a team.

The afternoon kicked off the skeet portion of the championships. Again, the Dolphins had strong performances that landed them the Collegiate Georgia SCTP State Skeet Championship title. Hensley and Esposito battled through mechanical issues on the field and scorching heat to earn two of the three awards for skeet.

Hensley finished runner-up with Esposito hot on his heels earning the Dolphins two of the three individual awards for the Collegiate Division of the championships. It was another stellar performance by the JU Varsity Shooting Team.

This past weekend, Jacksonville University & the JS&T Club hosted  its fourth  Jacksonville SE Collegiate Invitational (Regional) Shoot  with  82 Collegiate athletes from 9 Universities attending. Clemson University took top honors, followed by Embry-Riddle Aeronautical University,  and  Jacksonville University in very tight numbers . Both Clemson & JU are former ACUI Divisional National Champions. Rounding out the field were: Florida State University,  Abraham Baldwin Agricultural College, University of North Florida, Stetson University and Emmaual College. All schools competed in American Skeet, Trap & International Wobble Trap (and the cold!) with 20 plus MPH winds. We also added a Sporting Clays event at Amelia Shotgun Sports (www.ameliashotgunsports.com), with Clemson taking top honors and Jacksonville University RU.  MANY thanks to our Jax Gun Club volunteers who reffed, cooked and braved the elements to make this happen, as well as to Barbara Martin (GM) of Amelia Shotguns Sports for all of her efforts in our fist ever Sporting Clays event on Sunday!

Medals were also awarded to the top five individual shooters in Men’s and Women’s in each of the three events:

Monies from the Scholastic Clay Target Program (www.shootsctp.org), funded by the Midway USA Foundation (www.midwayusafoundation.org), made all of this possible. This shoot is hosted by JU and the SCTP and is held every Fall & Spring at Jacksonville Skeet & Trap, with the next shoot happening on October 19, 2013. There are over 225 Colleges and Universities with Clay Target Shooting Teams/Clubs. ALL teams compete just like Varsity programs with no distinction, and are represented by Divisions I, II, & III, but are not NCAA (by design), depending on program size. The schools in this past weekend’s shoot are all Division II schools.

We wish to thank all of the volunteers who came out to ref, cook and run this Collegiate event – we could not have done it without you, and this shoot is putting us on the National map!

Many thanks to the Jacksonville Gun Club, and all of the other Clubs here and around the country who have stood behind our Youth and Collegiate shooters, as they are our future. God Bless and safe shooting!

David  Dobson is one of our long-term Resident (Master) Teaching Pros and life member here at JGC. He and Addie, also a NSCA Certified Instructor,  live in Ponte Vedra Beach. He is President & CEO of Dobson & Associates, Inc., as well as the founder of Dobson Performance Shooting School (www.daviddobson.com), and current Founder/Head Coach of the JU Varsity Shooting Team and a member of the JU Faculty. He is also the Founding Head Coach for the UNF Shooting Team. He can be reached at: (904) 285-9500, or via Email at  Ddobsonpvb@aol.com.